There are several different types of Squirrels in the United States. If you are like me then you love them all. But sometime I wonder, What kind of Squirrel is that in my backyard.

Each type of squirrel has specific characteristics that can make them easy to identify. Knowing what kind of squirrels are in your backyard will help you to understand their habits and enable you to do the things necessary to draw more of them to your yard for feeding and enjoying.

In this post, we will identify the most common species of Squirrel found in the USA . We will also discuss the common regions in which they are found and identify some of their habits and characteristics.

5 Most Common Kinds Of Squirrels in North America

The Fox Squirrel is the largest of tree squirrels native to the United States. They typically grow to around 15 inches in length. But many times they can be found to grow in excess of 2 feet long.

Fox Squirrels have been known to live around 13 years in captivity. But in the wild, that lifespan is cut nearly in half due to natural predators, risks associated with humans, and common diseases which debilitate them.

The Fox Squirrel has three distinct color patterns depending on the region in which it inhabits.

In the most Western parts of the Fox Squirrel’s habitat they will be found to have a more grey back with a reddish rust colored belly.

In the North Eastern most parts of the Fox Squirrels habitat they will be found to have a yellowish underside with a greyish-red back.

In the most Southern Regions of the Fox Squirrels habitat, they will be found to have black coloring on its back which fades to a brown belly. Southern Fox Squirrels also have a distinct white stripe on their face and a white tip on their tail.

The Delmarva Fox Squirrel was one of the first critters ever to be listed in the Endangered Species Act of 1967. Once only found on the Delmarva Peninsula their habitat has now tripled and they can be found frolicking about in several states along the Eastern Seaboard of North America.

They also like to eat a wide variety of green shoots and tree buds as well as flower buds. They will also forage for local fruits and berries when in season.

Fox Squirrels have also been known to eat a wide variety of insects including beetles and moths.

A fox Squirrel will spend most of it’s day gathering and storing food in clandestine stashes. It will then find it’s stash through using scent markers and it’s keen sense of smell.

Predators of the Fox Squirrel

Fox Squirrels have a few natural predators. Any carnivorous animal located in the Fox Squirrels habitat would find it to be a tasty snack or even a full meal.

Coyotes, Wolves, Hawks, and Snakes all feed on Fox Squirrels.

Fox Squirrels mate year round. But they typically become very sexually active in the Fall peaking in December, and then again in June. Numerous males may court one female and compete for her.

The female will give birth approximately 45 days after conception usually in a hollowed tree or in a leaf nest perched in the fork of a tree.

the Fox Squirrel is born pink without fur and with its eyes closed. It will grow fur and open its eyes by around 5 weeks and will be weened from the mother at around 8 weeks.

Fox squirrels are unsociable. They will share feeding areas with other Squirrels, but will compete feverishly for the rule of that space. Other than mating, Fox Squirrels spend their time alone, foraging for and storing food.

How Rare are Fox Squirrels

No too far past in our American History the Fox Squirrel was highly prized by rural Americans as a source of food. Hence, their numbers were decimated.

In Recent years, they have came back strong in urban areas particularly and are not known to be endangered.

The American Red Squirrel is also much smaller than the Fox Squirrel with an average length of about 12 inches.

The American Red Squirrel may also have black stripes on it’s sides.

American Red Squirrels can be found throughout the United States. They prefer coniferous evergreen forest and are most common north of Georgia on the east Coast and also within the Rocky Mountains.

The American Red Squirrel enjoy eating the nuts and cones produced by evergreen trees. Many times you will find them perched in the corner of a branch gnawing away at a pine cone.

The American Red Squirrel is found to be very active during the summer months finding and storing seeds and nuts for the much more lean winters. They bury their seeds, and at times forget to dig them up therefore benefiting the forest by planting new trees.

They will also feed on bird eggs and bugs. And at times, it will eat baby mice and baby rabbits.

American Red Squirrels have a specific mating season. It last for about 105 days once a year from March through May. Males will compete for the opportunity to mate with the females. The female will mate for one day with 3 to 7 males. After 30-35 day the female will give birth to a litter of 3-7 and will nurse them for around 70 days. The young will be weaned at around 8 weeks.

American Red Squirrels reach sexual maturity at 1 year old, but are still not considered fully adult at that point as they are still developing.

A fascinating fact about the American Red Squirrel is that although they are considered a solitary animal, they have been known to “adopt” orphaned babies and raise them as their own. Red squirrels are people too. They adopt.

The American Red Squirrel is fiercely territorial and will fight violently to defend it’s territory whether male or female.

Aside from raising it’s young, the American Red Squirrel is a solitary animal that spends it’s days hunting for and gathering seeds and nuts.

the American Red Squirrel is also a very vocal animal. It will give out warning to other squirrels in the area to stay out of it’s territory with descending barks and chirps.

The american Red Squirrels nest, called a drey, is made in the crothces or hollows of trees or can be found in the hollow of a fallen tree.

Do you have a black squirrel in your yard? Chances are it is either a Grey Squirrel or a Fox Squirrel with a genetic mutation.

Black Squirrels are actually a subspecies of the Eastern grey Squirrel or the Fox Squirrel. Scientist believe that it started in the Fox Squirrel and eventually made it’s way to they grey squirrels through inter-breeding.

In 1961 10 cages of Black Squirrels from Ontario Park in London were released at Kent State where it was found that when the black squirrels mated with the local grey squirrel population, the genetic mutation of black fur was dominant and the trait was passed on to the offspring quickly raising the Black Squirrel Population which now seems to thrive at Kent State.

The Black Squirrels at Kent State have since developed a cult following with Festivals and Events in honor of them.

Black Squirrels are not always solid Black and can be found with white and brown patches or even a blend of grey and black fur.

The Western Grey Squirrel, though not as colorful as the Fox Squirrel or as Enchanting as the Black Squirrel, is a fascinating animal which deserves some special attention.

The Western Grey Squirrel is strictly a tree squirrel. It requires dense tree canopies to build its complex systems of nests and stores. It relies primarily on Arboreal Locomotion which means it travels in the trees.

Due to the decimation of their habitat, the Western Grey Squirrel faces an existential threat which it has no control over and is solely man-made harm.

Due to the fact that these lovely rodents were once widely considered pests or food and not an animal to be adored, the proper protections for these animals has only recently come into existence.

Western Grey Squirrels are silver or steel grey to a salt and pepper color with white underbellies. Occasionally they can be found to have tan to reddish spots around their faces or forward body.

the Western Grey Squirrel is easily identifiable by itslong bushy tail and is where it gets its nick-name the “Banner Tail”.

Depending on where the western grey squirrel lives it’s diet can be different. Those that live in evergreen coniferous forest tend to feed largely on Pine Nuts and Seed. Western Grey Squirrels that live in Hardwood forest feed on Acorns, berries and nuts and seasonal fruits.

the Western Grey Squirrel will collect food and either bury it in stores which are called caches, or they will take them to their nest for storage.

The Western Grey Squirrel is considered fairly solitary thought they are not necessarily territorial. They will forage on the ground with other squirrels, but rarely venture far from their “home tree”. The males make stick nest while the females will typically use hollowed trees or cavities for raising young.

The western grey squirrel mates in the late winter months and give birth in the early spring. the young are weened at about 10 weeks old.

The eastern Grey Squirrel is a very common Squirrel in the eastern Untied States and is extremely beneficial as it is known to regenerate forest with it’s incessant collection and burial of seeds and nuts.

These squirrels are extremely busty little critters and can get so carried away burying it’s food that it will forget where it is buried, and at times, panic to find it.

This trait makes them vitally important to the habitat in which they live.

The eastern grey Squirrel is found to have a dark to light grey back with hints of cinnamon tones around their face or sides. Their ears can be either pale grey or white and the same with their tails. They are typically about 13 inches at maturity.

The Eastern Grey Squirrel is quite the omnivore and opportunistic eater.

Their favorite foods are walnuts, beech nuts and acorns. But they will feed on a wide variety of blooms, buds and other vegetation.

They will also feed on caterpillars, beetles and other small insects. They even eat other smaller rodents such as mice and can also feast on lizards and small snakes. 🤮

Eastern grey Squirrels are not known to be territorial with the exception of a female protecting the are around her den when rearing young.

They can be seen fighting with Red Squirrels over territory, but the conflict is typically lways initiated by the smaller Red Squirrels

They Mate between December and February and then again from May through June. Gestation is around 45 days and they will wean their young at 8-10 weeks.

The Squirrels of North America are important to us as an animal to adore and a partner in restoring our forest ad strengthening our eco-systems.

Each species has magnificent traits, all of which were not covered here. If there is a trait you want to tell us about, let us know in the comments.

These were only the most common species. There are several other sub-species of squirrels found in North America with fascinating traits. Do you have a sub-species living in your area? We sure would love to hear all about them. Please tell us in the comments. 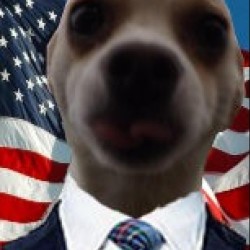 Lee Fox
I enjoy peeing on trees and chasing cars. I spend most of my days watching the Squirrels from the sliding glass door of my peoples home and also keeping an eye on that suspicious mail person..
I get in trouble quite often for marking my territory.
I am married to Bunny Fox.

This will close in 30 seconds